After a fire in 1836, which destroyed the spire and gallery of the church, the building was very much altered and so, in many ways, became essentially Victorian in character.

However, treasures of past centuries remain: a stained-glass window of 1260 in the north wall of the Sanctuary; the 14th century tower, and fine heavily timbered roof; two brasses of 1510; and some good 18th century wall monuments.  But the Church merits a separate visit, quite apart from this guided tour of the village, and a more detailed description will be found on the book table inside.

The clock was given by Sir Robert Wright of Headley Park in memory of his son, Evan Stanley, who died in 1900 at the age of six.  The initials of parents and child and the date are in the four corners.  There is a Bench Mark cut in the south-east buttress low down.  This is a surveyor’s sign of an arrow and a number, showing the height above sea level – 314ft in this case. 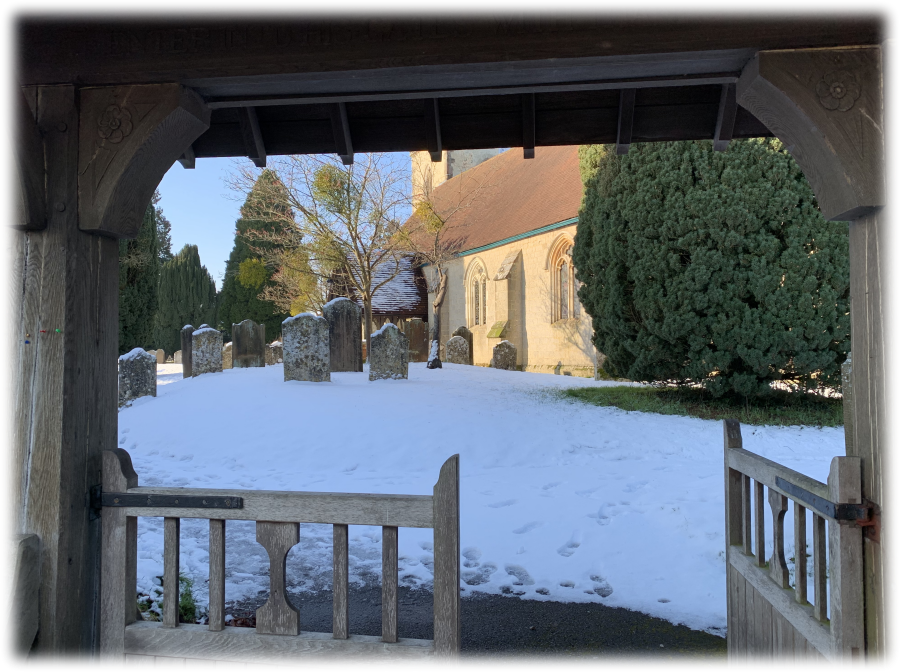 The Lych Gate  was erected in 1954 to commemorate the Queen’s Coronation.  It was designed by Mr C.K. Johnson-Burt, famous for the Mulberry Harbour off the coast of Normandy in the Second World War, and was built entirely by Headley men: H. Fyfield, E. Nash, K. O’Brien, R.L. Robinson, E. Warner and J. Wakeford.

The Old Rectory next to the church is an early 18th century building with a slate roof and end walls mainly of iron-stone.  There is an old leaded casement in the attic gable at the north end, an old hopper-head at the north-east corner, and a Gothic fanlight over the French doors.  It ceased being the home of our Rector in 1986, when the Guildford Diocesan Parsonages Board sold it on the grounds that it was too expensive to maintain and heat, and that a house of this style was unsuitable for a modern clergyman, separating him from his parishioners.
In view of its age and importance it is surprising that we know little of its history, but a valuation of 1783 describes it as follows: “A very good house, consisting of two parlours and hall, a kitchen and pantry on the ground floor; four bed-chambers, six garrets, four underground cellars, with a brew-house, milk-house, and other convenient offices; also of two spacious barns, a stable, cow-pens, granary, waggon-house, fuel-house, ash-house, etc.  The gardens, yard and rick-yard amount to about one and three-quarter acres"
Historic England Record

The Rectory Field opposite the church was for hundreds of years part of the Rector’s Glebe, ie. his income, and was let to local farmers.  Now it is in the hands of the Diocese of Guildford, who wanted to sell it in 1987 to raise money for Clergy Stipends and new churches.  A united effort by the whole parish, and a march through London with a petition to the Archbishop of Canterbury, prevented a scheme for 84 houses, garages and roads, and saved this green heart of the village.
Before the war it was the playing field and social centre, where cricket and football were played and the flower show and fête took place, thanks to the kindness of successive Rectors.  During the war both it and the Village Green were full of Nissen huts, with a brick-built cook-house providing meals for all the troops stationed in the village which, for the best part of ten years, was like an army camp.  When the Army vacated the huts, local families took them over as homes.

In researching for his book giving an account of the Canadians in Headley, JO Smith made some recordings.  One here gives some insight into the 'flavour' of the times.

Built during the incumbency of the Rev David Bentley, who became Bishop of Gloucester, this replaced the former Church Room in Glebe Road which, although constantly in use by various clubs and societies attached to the Church, was not nearly so conveniently placed.  An extension houses the Church Office and facilities for the disabled.

The Young Chestnut Tree  - a Pink Chestnut, provided by Peter Ellis, was planted in November 1991 by the Rector, Dick Woodger and his family, to celebrate the Centenary of the tree on the triangle in the High Street.  It had first appeared as the star performer on Headley Society’s winning float in the summer carnival.

The new All Saints’ Rectory was completed in March 1992 and replaced a 1961 building - Glebe Cottage - which was built "as a house for a Curate".

Parish Church. C14 Tower, the church being rebuilt 1859, by Flockton of Sheffield. Stone walls, and tiled roof. Aisleless nave (1380 rebuilt 1859), and chancel with north vestry, south porch (1899) and west tower. Plain roof. Ashlar walls, with buttresses (diagonal to chancel), plinth, coupled traceried windows beneath hood moulds, large east window and west window to the south side of the nave. The tower, of 1380, has a castellated parapet with corner pinnacles (added when a steeple was burnt down in 1836). The gabled porch has a timber frame on a low stone wall. Inside, there are Victorian fittings, one early feature being the tower arch at the north side of the nave west wall, where it gives entrance to the lower original floor level; the other feature is the nave roof, having original king-post trusses. Beside the font, on the floor, are 2 small brasses of c1510 of a male and female figure. The nave has good wall monuments, of the C18 and early C19, and at the extreme west end, at each side, are C18 (repositioned) altar paintings, one of Moses and the other Aaron, shown as turbanned figures within a wide frame with arched head. The small window on the north side of the chancel contains medieval glass (c1260) showing a saint, kneeling for execution.